The following examples highlight the functionality of IUPred3 in the identification of various forms of protein disorder. All figures are reproducible using IUPred3 by simply entering the given UniProt ID and selecting the corresponding options.

p53 is a tumor suppressor protein involved in apoptosis, cell cycle control and transcription regulation. It consists of the disordered N-terminal and C-terminal parts and the central largely ordered DNA binding domain.
The N- and C-terminal parts contain the trans-activation and the tetramerization motifs, respectively, each with its own Pfam motif. The structure of the central DNA binding domain (DBD) was determined both in isolation and bound to DNA as well. However, the disordered regions also incorporate a large number of solved structures from the PDB, but since these regions do not have a stable structure on their own, their structures can only be determined when bound to some molecular partner.
The disorder prediction score in red correctly highlights the ordered nature of the DBD and the disordered nature of both termini. Both the N- and the C-terminal binding motifs display reduced disorder tendency, which is a characteristic feature of protein-interacting disordered binding sites.

COX17 is a critically important subunit of the human cytochrome c oxidase. COX17 is a cystein-rich protein, and the redox state of these cysteine residues (and hence their role in protein stability) is highly dependent on the sub-cellular localization of the protein. Upon entring the oxidative environment of the mitochondrium, COX17 undergoes a disorder-to-order transition, forming a stable coiled-coil/helix/coiled-coil/helix structure (see Banci et al.)
The redox state-dependent conditional disorder of COX17 can be correctly predicted with the new, redox state-dependent prediction of IUPred3. IUPred3 correctly shows the redox sensitive region.

Hsp33 belongs to the holdase class of molecular chaperones. The activity of Hsp33 depends on oxidative conditions, however, for this protein the functional state is disordered. Under non-stress conditions, Hsp33 is a compactly folded zinc-binding protein with negligible activity. Oxidative stress causes the formation of two intramolecular disulfide bonds and the release of Zn2+ ions. This leads to the unfolding of the zinc-binding domain, exposing the substrate binding surface of the chaperone that is necessary for its activity.
The redox switch domain between residues 224-285 is correctly highlighted by the redox-dependent disorder prediction of IUPred3.

Human adenovirus C early E1A protein is a largely disordered protein essential for forcing the human host cell into S phase via modulation of the Rb1/E2F1 pathway and the inhibition of apoptosis via modulation of p53 degradation. These host-pathogen interactions are mediated by several binding events. Rb1 and CBP are targeted by two N-terminal tandem binding sites with determined complex structures deposited in the PDB, shown in green and red boxes. These known disordered binding regions are identified by ANCHOR2 as two distinct neighbouring peaks in the output score. While no other E1A- human protein complexes are currently known in structural detail, E1A harbors two additional known motifs between residues 113-126 capable of forming host-specific interactions. Both motifs, together with the putative binding site for the deubiquitinase UBE2I between residues 76-140 are correctly recognized by ANCHOR2 as a separate peak in the prediction score. A distinct peak C-terminal around residue 220 has no known binding partners; however it entails a serine residue that was shown to be heavily phosphorylated by host kinases, hinting at an additional important binding region with currently limited characterization.

p27 is one of the major regulators of cell cycle progression, being an inhibitor of the CDK2/cyclinA complex. p27 is fully disordered and binds to the target complex using a large extended interface harboring several strongly binding regions interspersed with weak binding linkers.
The graph shows the region of p27 that becomes ordered during the interaction. ANCHOR not only predicts correctly the binding event, but it is also able to pinpoint the strongly binding regions with the provided ANCHOR score having a strong correclation with the number of intermolecular atomic contacts (see Meszaros et al.). 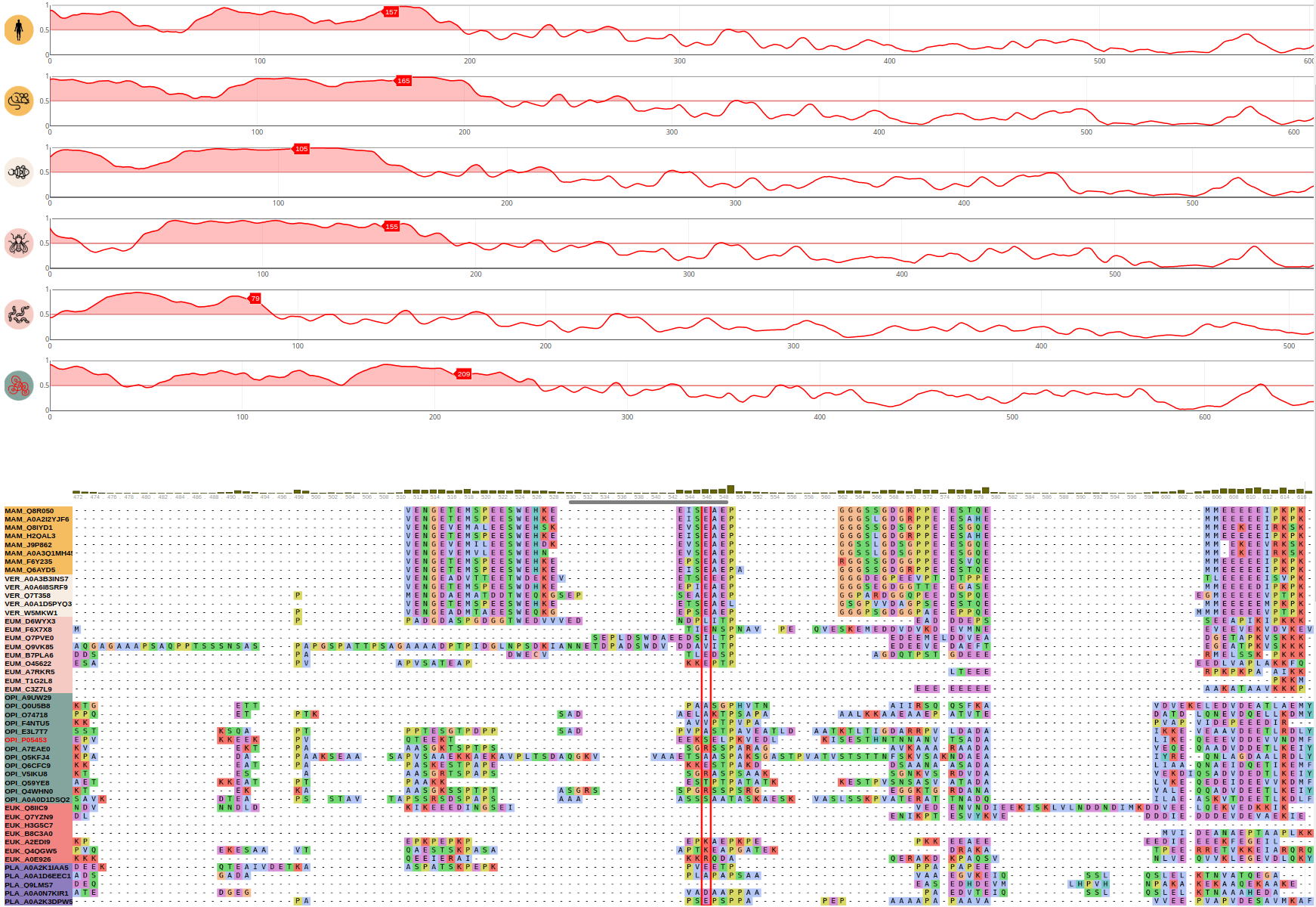 The budding yeast Sup35 translation termination factor is a key element of protein synthesis and has the ability to form reversible biomolecular condensates. Sup35 can be divided into a disordered N-terminal region and an essential C-terminal GTPase domain which catalyzes termination of protein synthesis. The N-terminal region has ionizable groups, specifically glutamic acid residues, located close to the C-terminal domain. This charged N-terminal region acts as a pH sensor and provides the interactions that drive liquid phase separation as a response to enviromental stress caused by pH changes. This liquid phase separation based mechanism is capable to rescue the GTPase domain from irreversible aggregation providing the functionality of Sup35 during enviromental condition changes. The pH sensor based biomolecular condensation forming ability of Sup35 is shared among budding yeast and fission yeast. Moreover, this feature of the N-terminal region of Sup35 seems to be conserved not only in opisthokontas, but also in other eukaryota orthologs including mammalian sequences as well, which suggests that condensate formation of the translational termination factor is a highly conserved and ancestral function.